Anxiety/Stress Health Info News Weight Loss
October 11, 2017October 11, 2017 Daithi O Riain health, weight_loss
IRELAND’S OBESITY RATES AMONG WORLD’S WORST
Irish Times, April 2016.
Ireland is set to become the most obese country in Europe, with the UK, within a decade, according to a study published in The Lancet.
Irish men already have the highest body mass index (BMI) – a key measure of overweight – in Europe, while Irish women rank third, the study shows.
Almost one-fifth of the world’s obese adults (118 million) live in Ireland and five other high-income English-speaking countries – Australia, Canada, New Zealand, the UK and the US.
One-quarter of the world’s severely obese adults live in the same six countries.
By 2025, 37 per cent of Irish women will be obese, just behind 38 per cent in the UK, the study forecasts.
Among men, 38 per cent in Ireland and the UK will be obese.
The authors, from Imperial College London, say we now live in a world in which more people are obese than underweight.
By 2025, about a fifth of adults worldwide will be obese.
Prevalence
The number of obese people worldwide has risen from 105 million in 1975 to 641 million in 2014.
The number of underweight people fell by about one-third for men and women.
“Over the past 40 years, we have changed from a world in which underweight prevalence was more than double that of obesity, to one in which more people are obese than underweight,” says senior author Prof Majid Ezzati from the school of public health at Imperial College.
“To avoid an epidemic of severe obesity, new policies that can slow down and stop the worldwide increase in body weight must be implemented quickly and rigorously evaluated, including smart food policies and improved healthcare training.”
A thickening of the waist is not inevitable, the study shows.
Women in Singapore, Japan and European countries such as Belgium, France and Switzerland had virtually no increase in BMI over 40 years. 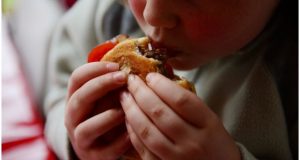 SUMMARY: The health hazards/risks associated with obesity are; *A psychological burden, *Increased osteoarthritis, *Increased blood pressure, *Increased levels of cholesterol, *Increased Type 2 Diabetes, *Increased risk or heart disease, *Increased incidence of cancer, *Increased early death.
Obesity in men is generally ranked at over 25% body fat, or BMI >25, and in women its over 30% body fat or BMI > 30