Aisling Carson, 22, was diagnosed with the crippling bowel condition Ulcerative Colitis in 2014 when she was 17-years-old.
But the Belfast woman has told how life-changing surgery has given her her life back.

She said: “For three years I didn’t live. I had to quit football, I didn’t go out with my friends. I didn’t want to leave my house. I couldn’t think about anything else other than being sick.”

A student at Rathmore Grammar, Aisling was in lower sixth and in the middle of sitting exams when she became unwell, Belfast Live reports.

She said: “I was getting really bad symptoms like going to the toilet 30 times a day, very bad abdominal pains and I’d lost a lot of weight in just a matter of days.

“Looking back I really should have been in A&E. There was a six week wait for a colonoscopy so I went privately and in a few days they confirmed it was Ulcerative Colitis.”A range of drugs exist for sufferers of both Crohn’s and Ulcerative Colitis – with a final step being surgery.

Aisling said: “For three years I was probably going to the toilet about 15 times a day. I couldn’t leave the house without the fear of needing the toilet.

“A lot of the drugs we tried took a few months to actually work. So we would try a drug, wait a few months and then it wouldn’t work so we’d try the next one.

“I got to the last drug I could try and it didn’t make an impact at all.

“I always thought I didn’t need the surgery but it came to the point where the pain became too much.

“It was May 2017 and it was exactly three years since I’d been diagnosed.

“I got an ileostomy surgery which means I got the full colon removed. I still have my rectum and the end of my small intestine through a hole in my abdomen.”

The impact for Aisling was immediate. She said that the only pain she woke up with was the abdominal wounds from the surgery itself.

She now uses an ileostomy bag which collects waste from the body.

But, while the health benefits were huge – she admitted that the idea of having a bag attached to her stomach did fill her with trepidation.
She said: “I was petrified. I remember googling it and seeing images of a nude or beige bag. You didn’t see it on people my age, it was always on older women or older men.
“It completely freaked me out.

“After the surgery I got fitted with a grey bag which weirdly enough made it better.

“I went on holiday a month and a half after surgery and that was fine. Initially I’d loads of confidence, and I didn’t care. I was just so happy to be able to do so much again.

“This year I was in Ibiza and America and I’d a bit of self-doubt – but I’d just to keep reminding myself that I wouldn’t have been on the holiday if I didn’t have the bag.

“There’s a really big community of girls my age on Instagram who post about it, but they have a positive outlook. It’s what’s letting us live.

“The hardest thing is that people see a bag and don’t know what it’s about.

“If people knew that they have a bag because they were really sick then I wouldn’t care what people thought – they’d know what I’d been through.”

As well as the holidays and normality in day-to-day life over the past year and a half, Aisling has also been able to get back to another love – Gaelic football.

Playing right-half back, she was part of the St Brigid’s team that won the Intermediate County Final on September 22.

She’s studying Business Technology part-time at Ulster University and working with Deloitte.
Most of all, though, she’s making up for lost time.
She said: “I think being open about the condition gives you more confidence – I’ve nothing to hide.

“After the surgery I went from 0 to 100.
“I’ve been trying to catch up on three years of my life in the last year – and I’m grateful that it’s been going well so far.” 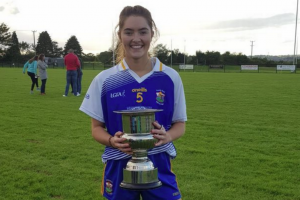