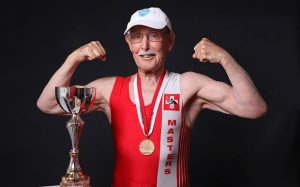 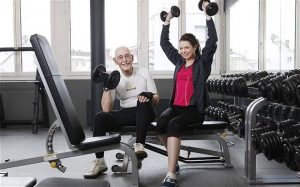 LATEST 23-7-2016
NEVER GIVE UP. ANYTHING IS POSSIBLE.
An edited version of the IRISH TIMES SATURDAY JUNE 28 2014 by Aine McMahon.
‘Work is fundamental for longevity,’ says 94 year old.
The three secrets to longevity of life are work, diet and exercise, in that order, one of the world’s fittest pensioners said in Dublin yesterday.
Dr Charles Eugster, who turns 95 next month, said he believes retirement should be abolished. ‘The most important thing for anyone is work, regardless of how old you are,”he said. “Work is the fundamental thing for longevity.”
The London born grandfather is a 34-time World Masters Rowing Championship gold medalist and three time World Strenflex champion. He scored the highest number of points ever in last years Strenflex European Championships, in which he performed a routine that featured 61 chin-ups, 50 push-ups, 48 abdominal crunches, and 57 dips, each completed in 45 seconds.
Dr Eugster was a keynote speakerat the inaugural Register of Exercise Professionals convention at UCD yesterday.

“For me personally, I consider retirement a financial catastrophe and a health disaster. Older people should be working and they would be healthier as a result.” he said.
He added; “Get rid of retirement,- you can always learn something new at any age ….
The purpose of life is to have a purpose in life.
Dr Eugster worked as a dentist until the age of 75 and later as a publisher. He was unemployed from the age of 82 to 90, a period he describes as one of the “worst times” of his life.
Dr Eugster hasn’t been to the doctor in years and continues to train in a gym three or four times per week. He said he is worried about the growing ageing population in which diabetes and obesity are on the rise, which he describes as a “growing pandemic”.
Old age can be a chamber of horrors but it’s never too late to change your life and try something new.